Arise, shine; the light of the world has come, and God's glory shines on us! Darkness enveloped the earth, but now the light of Christ has become our glory. We will see someday—no, we have seen and we've become radiant. Our hearts rejoice with all creation as we live out God's splendid praise.

1In the time of King Herod, after Jesus was born in Bethlehem of Judea, wise men from the East came to Jerusalem, 2asking, "Where is the child who has been born king of the Jews? we observed his star at its rising, and have come to pay him homage." 3When King Herod heard this, he was frightened, and all Jerusalem with him; 4and calling together all the chief priests and scribes of the people, he inquired of them where the Messiah was to be born. 5They told him, "In Bethlehem of Judea; for so it has been written by the prophet:


6'And you, Bethlehem, in the land of Judah, are by no means least among the rulers of Judah; for from you shall come a ruler who is to shepherd my people Israel.'"


7Then Herod secretly called for the wise men and learned from them the exact time when the star had appeared. 8Then he sent them to Bethlehem, saying, "Go and search diligently for the child; and when you have found him, bring me word so that I may also go and pay him homage."

9When they had heard the king, they set out; and there, ahead of them, went the star that they had seen at its rising until it stopped over the place where the child was.

10When they saw that the star had stopped, they were overwhelmed with joy. 11On entering the house, household, etc, they saw the child with Mary his mother; and they knelt down and paid him homage.

Then, opening their treasure chests, they offered him gifts of gold, frankincense, and myrrh. 12And having been warned in a dream not to return to Herod, they left for their own country by another road.

We sometimes announce we've "had an epiphany." Today we're having an epiphany and then we move into a several weeks long season of epiphany. Combining roots "epi" = upon and "phan" = manifestation, revealing, revelation, illumination, uncovering, an epiphany is a shining out, showing forth.

The day and the season of epiphany (Sundays leading up to Transfiguration, the Sunday before Ash Wednesday) focus on light, particularly the light of Christ. The Bethlehem-born Jewish baby Jesus is savior of all, Lord of all, king and shepherd for all cultures, social statutes, abilities, ethnicities, and religions. In the global north Epiphany arrives shortly after the winter solstice, making its symbolism of light especially full of meaning. Stars are THE epiphany symbol.

The twelfth day of Christmas? That must have come from someone who couldn't quite count. When January 6th doesn't fall on a Sunday, many churches celebrate epiphany on the nearest Sunday. Days after Christmas offer several possibilities. Last Sunday we discussed Jesus' Presentation in the Temple; the Circumcision and Name of Jesus on January 1st also would have worked well for today. January 6th was Christ's birthday until the 4th century, when Emperor Constantine moved it to after the solstice to correlate with the Feast of the Unvanquished Sun people already knew about. After that, January 6th became the baptism of Jesus, as it still is in Eastern expressions of Christianity. Next Sunday we'll observe Baptism of Jesus.


Visitors from the East / Revelation

The gospel reading for the day of Epiphany always comes from Matthew, because Matthew is the only gospel with the visiting Magi. On Epiphany we usually sing "We Three Kings of Orient Are," but scripture doesn't say the gift-bearing visitors were kings, and it doesn't say how many visitors from the east there were. However, it mentions three gifts, which likely is the reason the Western Church says three, though the Eastern Church says twelve. There are only two kings in this scripture: the Roman puppet King Herod the Great and King Jesus.

These visitors most likely were religious leaders, probably Zoroastrian priests who also were astrologers who studied and interpreted stars for signs and meanings. They well may have been astronomers in our sense of people with expertise about the heavenly bodies. In any case, they were from a different culture, religion, and ethnicity then the Jews; they were outsiders. This narrative closely relates to Matthew's genealogy with its many non-Jews and ethnic "others." Especially In Matthew's gospel, we find Jesus revealed to the non-Jewish nations.

God does whatever it takes to reach out to and embrace everyone: a star for people who knew the skies and the stars and trusted sky signs; a scripture passage for people who were biblically literate and trusted those texts; dreams for those who relied on less conscious, rational, cerebral information. Skies and scriptures and dreams all point to the same Bethlehem Baby.

Isaiah and Matthew both celebrate light. Isaiah 60 announces our light is here! It take very little light to blaze through a dark space. Without light there are no shadows. In the Ancient Near East (ANE) a star in the sky often signaled the birth and death of a great individual. Numbers 24:17 names stars as a Messianic sign.

Matthew writes about the star at "the rising" of the sun, at daybreak, at dawning. Stars are scattered all over the Matthew passage with east, east, star, star (and magi in the room, not back in the stable). "From the east" is anatolia—the rising of the sun. (Not Bruce Springsteen's The Rising!) Latin words oriens and orient mean the same as the Greek anatolia—the other side of the world from ours?

Because this story of persons from the East, from The Rising – the direction where the sun rises to start a new day – opens up questions of inclusion, of boundaries, of people who are like us and different from us, the season of Epiphany emphasizes evangelism beyond the ways we've "always done it." Especially during this lockdown when nothing continues as we've always know it, revealing Jesus with a star, a scripture passage, and a dream, enlighten our imaginations and our outreach.

Only one question this time:

• With COVID-19 vaccines getting on track, is it time for us to get on track for returning to church campus and reclaiming ministries we'd been doing, or exploring new ones?


Star Words to Light your Path

Some people make and soon break new year's resolutions. Some observe them quite thoroughly. Alternatively or in addition to, there's an Epiphany tradition of choosing a star word as a guide for the upcoming year. You can ask someone else, or in the Spirit claim a word to guide you the way a star led the magi. 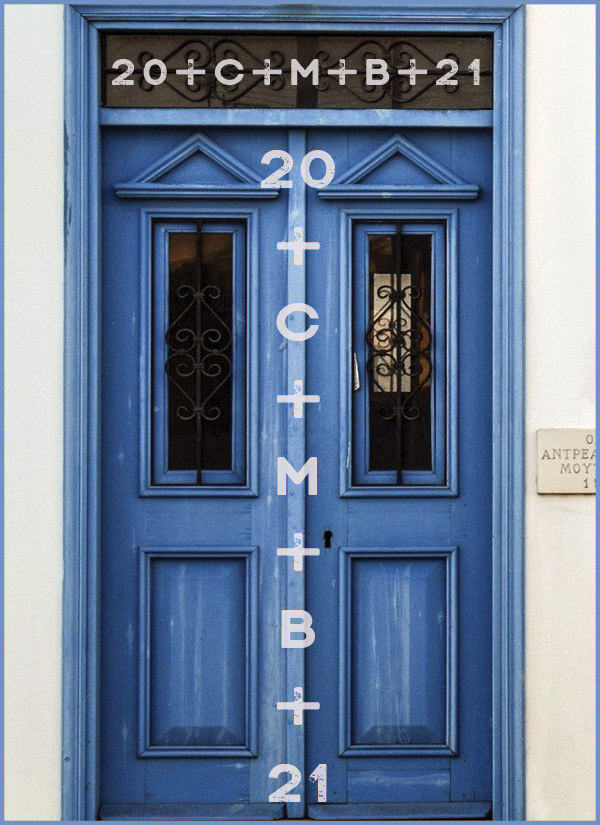 Epiphany is the traditional day for announcing the date of Easter. Blessing your house with chalk is another historical practice for New Year's Day, Epiphany, or any time. An internet search will provide resources to make the blessing short and simple or long and elaborate. Chalk comes from the earth, it's a communication medium, it's often part of play. The inscription for this year is 20+C+M+B+21—the calendar year with CMB sandwiched in the middle. You can write above the door, beside the door, on the door, vertical or horizontal. You can bless the main entrance and/or separate rooms. If you have an office, workshop, or studio outside your home, you can bless those, too.

CMB can stand for traditional magi names Caspar, Melchior, and Balthasar, or it can be initials for Christus Mansionem Benedicat / May Christ Bless this House. Although the Latin house is similar to the English mansion for a huge dwelling or manse for the pastor's house, it doesn't imply large. It's simply a home or dwelling, a way station or stayover place. I got the blue door in my illustration from Pixabay with legal reuse rights. There's no reason not to write twice or more than once as I did.