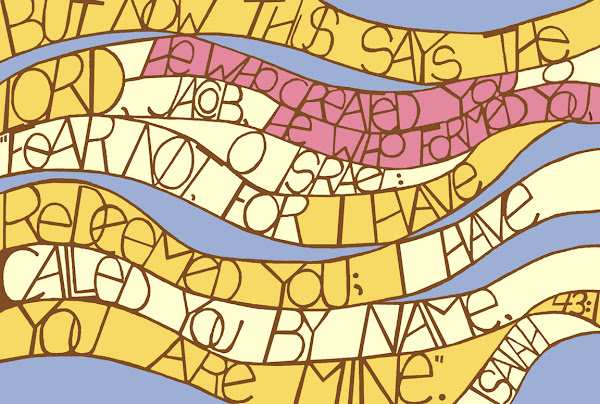 But now thus says the Lord, he who created you, O Jacob, he who formed you, O Israel: "Fear not, for I have redeemed you; I have called you by name; you are mine." Isaiah 43:1-7

15As the people were filled with expectation, and all were questioning in their hearts concerning John, whether he might be the Messiah, 16John answered all of them by saying, "I baptize you with water; but one who is more powerful than I is coming; I am not worthy to untie the thong of his sandals. He will baptize you with the Holy Spirit and fire. 17His winnowing fork is in his hand, to clear his threshing floor and to gather the wheat into his granary; but the chaff he will burn with unquenchable fire."

21Now when all the people were baptized, and when Jesus also had been baptized and was praying, the heaven was opened, 22and the Holy Spirit descended upon him in bodily form like a dove. And a voice came from heaven, "You are my Son, the Beloved; with you I am well pleased."

Baptism of Jesus initiates the season of Epiphany, a variable length segment of green and growing Ordinary (ordered, structured) Time. Every year during after the Great 50 Days of Easter we have a long stretch of Ordinary Time when we count Sundays after the Day of Pentecost that's the 50th day of Easter. The Epiphany season begins and ends with a trinitarian theophany—a showing-forth, manifesting, displaying divinity. Today we celebrate the first theophany with the Baptism of Jesus; three days before Lent begins with Ash Wednesday, we'll experience Jesus' Transfiguration.

Very few events are in all four gospels; surprisingly, all of the gospels don't even have a birth story or a resurrection narrative. But we find John baptizing Jesus in all four. Sit up and take notice!

The word and concept of Trinity – Tri-Unity, three in one – is not in the bible, but scripture implies a Triune God—maybe especially in scenes like today's Baptism of Jesus and in the Transfiguration we'll celebrate to conclude the Epiphany season before Lent begins. Early on with the epistles and later when the four gospels were compiled, questions of Jesus' divinity hadn't yet started circulating. Because those concerns belong to a couple of centuries later, no one would have drawn upon "our" baptismal theology and wondered why the sinless Son of Heaven needed to be baptized.

The Council of Nicaea convened in the year 325 and gave us the Nicene Creed, the council of Chalcedon in 451 wrote the Definition of Chalcedon. Both statements affirm Jesus' full humanity and complete divinity.

Inevitably we read a whole lot backwards when we interpret scripture. We've been living the rest of the story, so that's only natural. We interpret scripture in the same way we look back and then understand (or maybe not) our own experiences. Sometimes the pieces finally start to fit together. (And sometimes they really don't.)

After God's people left imperial Egypt and trekked through the desert, they had to cross the Jordan River in order to enter Promised Land Canaan. The Jordan formed a border and boundary between their old existence as Pharaoh's slaves, decades of desert wanderings, and new lives of freedom, obedience, and grace in covenanted community.

Like God's people Israel before him, Jesus stepped into the Jordan River that was border and boundary between his earlier, more private life and his public life of obedience, grace, and keeping righteous covenant. John's baptism wasn't as much about individuals as it was another political, religious, and economic new beginning. Jesus' baptism continued the Jewish practice of the bath – washing, mikvah – that may have started at Mount Sinai during the Exodus from Egypt, before Moses went up the mountain to receive the Ten Commandments. [Exodus 19:10-14] Twenty-first century Jews still have a practice of mikvah that's a cleansing bath or immersion.

Although it has similarities to Jesus' baptism by John, our trinitarian baptism is into the death and resurrection of Jesus Christ. Jesus was not baptized a Christian! God's affirmation of Jesus as beloved son is mostly about Jesus' call and purpose rather than about Jesus' nature. Jesus did not begin his public ministry until his baptism with God's call and claim on him. God's claim on each of us as beloved daughters and sons also is about God's call and purpose for us. For us also, living waters form a border and a boundary between our more private lives and our public lives of obedience, grace, keeping covenant with creation, and advocating for justice. In the same way the Holy Spirit filled Jesus at his baptism, the heavens open at our baptism and fill us with the Holy Spirit. In his Small Catechism Martin Luther asks, "How can water do such great things?" It is not only water, but water combined with the Word of God…

My header illustration from Isaiah 43, the traditional OT reading for this day announces, "But now thus says the Lord, he who created you, O Jacob, he who formed you, O Israel: 'Fear not, for I have redeemed you; I have called you by name; you are mine.'" God has Created – Formed – Redeemed – Called – Named – Claimed us.
@ Friday, January 07, 2022