10And in the spirit he carried me away to a great, high mountain and showed me thje holy city Jerusalem coming down out of heaven from God.

22 I saw no temple in the city, for its temple is the Lord God the Almighty and the Lamb. 23And the city has no need of sun or moon to shine on it, for the glory of God is its light, and its lamp is the Lamb. 24The nations will walk by its light, and the kings of the earth will bring their glory into it. 25Its gates will never be shut by day—and there will be no night there. 26People will bring into it the glory and the honor of the nations. 27But nothing unclean will enter it, nor anyone who practices abomination or falsehood, but only those who are written in the Lamb's book of life.

1Then the angel showed me the river of the water of life, bright as crystal, flowing from the throne of God and of the Lamb 2through the middle of the street of the city. On either side of the river is the tree of life with its twelve kinds of fruit, producing its fruit each month; and the leaves of the tree are for the healing of the nations. 3Nothing accursed will be found there any more. But the throne of God and of the Lamb will be in it, and his servants will worship him; 4they will see his face, and his name will be on their foreheads. 5And there will be no more night; they need no light of lamp or sun, for the Lord God will be their light, and they will reign forever and ever. 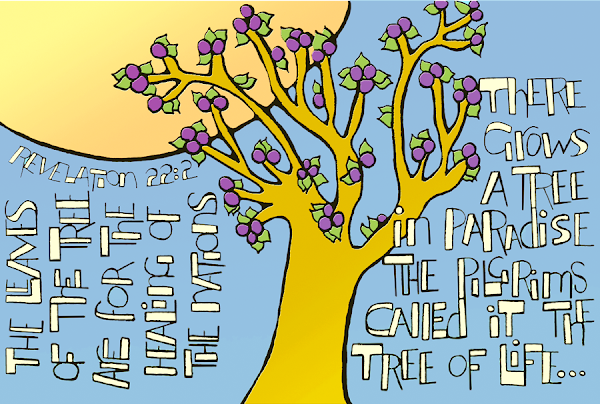 "The leaves of the tree are for the healing of the nations" | "There grows a tree in Paradise. The Pilgrims called it the Tree of Life…"

Easter is a Season

Easter is 50 days, a week of weeks, 7 x 7. Easter season readings in the lectionary began with stories that mostly featured people who followed Jesus during his earthly ministry. As the weeks rolled by, they reached outward to begin embracing people from other places and cultures. Two Sundays from now we'll celebrate the 50th day of Easter, the Day of Pentecost (wear red!) that initiates the long Season of the Spirit-Time of the Church with mostly green Sundays.

In the beginning of the bible, Genesis 1 and 2 have very different narratives of the first or original creation; the last book in the biblical canon, Revelation, continues into a new creation that's both new earth and new heaven.

Ever since Abram and Sarai left Ur on their way to the place God would show them, humans have been political animals.

You probably know the basic chronology of scripture with the liberation of God's people from slavery in Egypt; a decades-long desert trek to the Land of Promise; exile to Babylon by another empire; a journey home with subsequent restoration of worship, community, and commerce; prophets who spoke for God and against the establishments. Then Jesus, Emmanuel, God-With-Us. All along the way God prepared the people to live together in freedom as they welcomed the sojourning "other-than-us" stranger, strove for distributive justice so everyone had enough, no one too much, and stewarded the land as part of God's covenant call.

We've been discussing Revelation as a guidebook for living baptized amidst empire, violence, alienation, and death—in this year 2022's terminology, a map for resistance! Last week's Revelation text (here's the blog for Easter 5) celebrated a God so passionate about the world that God chose to live amidst creation as one of us in a body like ours formed out of the stuff of the earth. Today's second reading finally shows us the new creation as a place where garden and city, native-born and immigrant, past and future meet.

Today's text pictures a city literally descending from heaven, a place of safety that welcomes everyone. The city gates always are open; God's presence permeates and lights the city all the time, without the fearsome dangers night and darkness in an urban area often bring.

In the Good Book we discover many almost parallel passages. Today's from Revelation has a similar feel to one in Ezekiel, but without a temple, "for its temple is the Lord God the Almighty and the Lamb." (21:22) After he lines out technical instructions for a restored temple, Ezekiel's vision expands to a preview of a New Jerusalem. By the way, Ezekiel was a priest in the holiness tradition of the J-temple, so he could not have imagined a Jerusalem without a temple.

1Then he brought me back to the entrance of the temple; there, water was flowing from below the threshold of the temple toward the east (for the temple faced east); and the water was flowing down from below the south end of the threshold of the temple, south of the altar. ... 7As I came back, I saw on the bank of the river a great many trees on the one side and on the other. ... 9Wherever the river goes, every living creature that swarms will live, and there will be very many fish, once these waters reach there. It will become fresh; and everything will live where the river goes. ... 12On the banks, on both sides of the river, there will grow all kinds of trees for food. Their leaves will not wither nor their fruit fail, but they will bear fresh fruit every month, because the water for them flows from the sanctuary. Their fruit will be for food, and their leaves for healing.