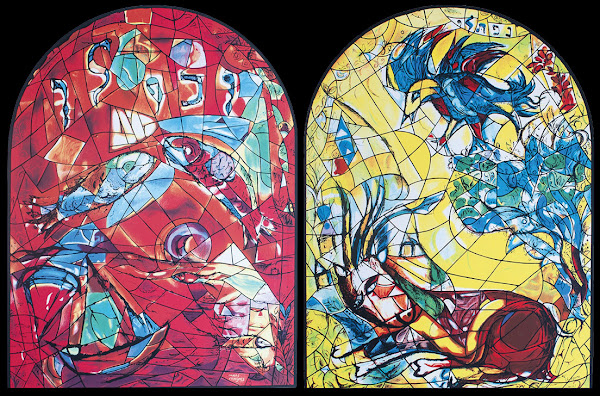 Zebulun and Naphtali from Jerusalem Windows by Marc Chagall

Zebulun shall settle at the shore of the sea;
he shall be a haven for ships,
and his border shall adjoin Sidon.
Genesis 49:13

1 But there will be no gloom for those who were in anguish. In the former time he brought into contempt the land of Zebulun and the land of Naphtali, but in the latter time he will make glorious the way of the sea, the land beyond the Jordan, Galilee of the nations.

2 The people who walked in darkness
have seen a great light;
those who lived in a land of deep darkness—
on them light has shined.

12 Now when Jesus heard that John had been arrested, he withdrew to Galilee. 13 He left Nazareth and made his home in Capernaum by the sea, in the territory of Zebulun and Naphtali, 14 so that what had been spoken through the prophet Isaiah might be fulfilled:


15 "Land of Zebulun, land of Naphtali,
on the road by the sea, across the Jordan, Galilee of the gentiles—

16 the people who sat in darkness
have seen a great light,
and for those who sat in the region and shadow of death
light has dawned."


17 From that time Jesus began to proclaim, "Repent, for the kingdom of heaven has come near."

18 As he walked by the Sea of Galilee, he saw two brothers, Simon, who is called Peter, and Andrew his brother, casting a net into the sea—for they were fishers. 19 And he said to them, "Follow me, and I will make you fishers of people." 20 Immediately they left their nets and followed him.

21 As he went from there, he saw two other brothers, James son of Zebedee and his brother John, in the boat with their father Zebedee, mending their nets, and he called them. 22 Immediately they left the boat and their father and followed him.

Jesus in the World

Epiphany celebrates Jesus as light, as revelation to everyone everywhere, and reminds us YHWH always has been God of all, God for all, not exclusively Israel's.

We've experienced 2023's retelling of Jesus' baptism (found in all four gospels). Slightly out of order for our logic, every year (in the three synoptic gospels) on the first Sunday in Lent we hear about Jesus' Spirit-filled, post-baptismal temptations in the remote wilderness. All four canonical gospels have a different event for Jesus' first act of public ministry; most likely they all happened around the same time and clearly only one could have been the actual first, but each choice says something about the gospel writer's overall focus.

• Mark 1:16-26: Jesus calls the brothers Zebedee and immediately exorcises a demon in the synagogue
• Luke 4:16-21: Jesus announces the Jubilee year in synagogue
• John 2:1-11: Jesus turns water into wine at the wedding at Cana—a party!

You can't separate geography, climate, and culture. Jesus making a home in the territory of Zebulun and Naphtali in Capernaum-By-The-Sea, along the Way-Of-The-Sea that connected Egypt to Mesopotamia, is a bittersweet reminder that God owns the world and everything it. When Jesus, Emmanuel, God-with-us [Matthew 1:23] goes there, light dawns on the people's deadly darkness.

Matthew emphasizes Jesus' connections with the whole people of God. Tribal descendants of Jacob's sons, Zebulun (Joshua 19:10-16) and Naphtali (Joshua 19:32-39) were part of territorial allotments first promised to Abraham and Sarah. Land is God's gift of covenanted place and space, yet the land of promise God called the people to steward into agricultural bounty and interdependent community is now under Roman control. Land is not alienable, not a "property" we can sell:

The land shall not be sold in perpetuity, for the land is mine; you are but aliens and sojourners with me. Leviticus 25:23

1. birth in Bethlehem
2. to Egypt for refuge from Herod's decrees
3. moving to childhood home in Nazareth
4. now he's in Capernaum

For Isaiah, Assyrian occupation equaled darkness and hopelessness, as did Rome's for first century Judea. Since Advent we've been in an extended season of light. Unlike John, Matthew doesn't name Jesus as "light of the world," yet after Matthew narrates the people have seen a great light, Jesus repeats John the Baptist's "Repent, for the kingdom of heaven has come near," although Jesus actually embodies the reign of heaven. It is here, it is now, and it is the polar opposite of Rome's life-extinguishing darkness.


As Jesus walked by the Sea of Galilee, he saw two brothers, Simon, who is called Peter, and Andrew his brother … he said to them, "Follow me, and I will make you fishers of people." Immediately they left their nets and followed him. … James son of Zebedee and his brother John … left the boat and their father and followed him.


Matthew tells us light has dawned and Jesus calls us to repent so the light will blaze brightly. Follow Jesus? As Matthew's gospel progresses, Jesus provides formal instruction in the Sermon on the Mount and offers parables about the reign of heaven. We see Jesus healing human diseases and confronting economic, religious, and governmental powers that be.


Church in the World / Light of the World

And Jesus said, "Follow me…" Immediately they left their nets and followed him.

Today let's stay with the season of Epiphany and the gospel according to St. Matthew. Light dawns in Jesus. What does Jesus' presence do in the darkness and death of Roman imperial rule?

Matthew's Jesus is the ultimate teacher who wants his followers to be the best learners ever.